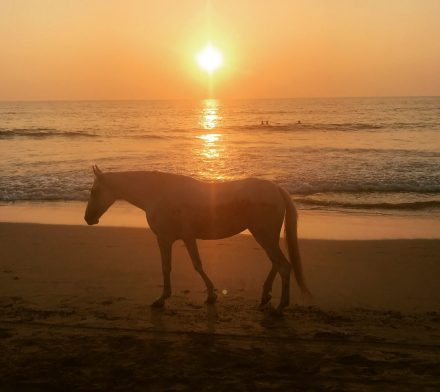 Maybe some women aren’t meant to be tamed. Maybe they just need to run free until they find someone just as wild to run with them.

Sex and the City

Every day in Agonda village, south Goa, a white horse walks slowly from her home through the streets. She heads down to the beach where she will walk slowly from back and forth along the shoreline until sundown. Throughout the day, she stops off at a beach hut or two for a slurp of water, then at sunset, she stops serenely to allow people to take a photo of her. Then she makes her way back, stopping off at a bar or two, to poke her head over the counter. It marks a passing of the day, a ritual, like the morning yoga class or the feeding of the cows on beach before the sun goes down. I asked if she had a name. “White Horse,” they said.

I witnessed all of this from my Simrose beach hut and got caught up in its rhythm. It seemed to form part of a constant thrum of activity, which was underpinned by the sound of the waves crashing on the shore. I arrived at 2am and couldn’t believe how loud they were at high tide. I was woken by them several times during the course of my stay and had to wear earplugs. “Oh yeah – always get a hut further back from the beach,” people said, who had been there before. The waves are the soundtrack to everything and even the yoga teacher used their rhythm to breathe against – a technique I learned called ujjayi or ‘ocean breath’.

If I sound like I’ve gone all spiritual, I sort of have. People said, “Oh Goa isn’t the real India”, thinking of the trance scene the litter-strewn beaches of the north. Well it was real enough to me, and I loved it. I did yoga class every morning I could with Lucia, who was from Italy and filled with hypnotic phrases about the various chakra and how I could focus on them. I had had a stressful time at work before Christmas and was coming back to a promotion that promised an extremely busy time ahead so I made the most of the chance to connect with myself and the sea (which I love to be beside and float in a boat upon but I can’t swim in).

The biggest surprise was finding that I knew most of the vinyasa poses already from my time training in contemporary dance. I didn’t know that Martha Graham had nicked them all to become ‘the mother of modern dance’. Even in the two weeks I was there I started to feel my old dance body coming back – strong back, strong core, a stretched feeling in my hips and legs – a feeling I never thought I would recreate.

I developed my own White Horse routine. It involved walking on the beach, yoga, then breakfast, reading on my hut deck, lunch, more reading, another walk, cocktails, dinner then drinks at a bar. As with my very first solo trip abroad, it took me three days to leave the resort. I was a little bit scared of what would be there (so much scaremongering about India, especially for women). But as it was Christmas, I just spent the first few days in the resort, enjoying the efforts the staff made to make it fun and festive. I spent Christmas Eve with a brother and sister from Manchester – the brother lives down the road from me in London. Small world…

On Boxing Day I decided I needed to venture out. I found a single strand of shops and stalls selling clothes, jewellery, spices, and copious sarongs. I found friendly shop-owning women, all telling me I was their ‘first customer of the day’ and therefore they were giving me ‘the best deal’. Even though I knew it was all sales talk it was fun and I bought beach dresses and loose trousers. I didn’t get hassled once by men other than to ask if I wanted a taxi. I felt safe. I spotted a bar on my way back with my spoils and liked its vibe, and promised myself I’d venture out later. It’s always tough that first time. It always requires a bit of Dutch Courage to make that first step so I made mine a Caipirowska.

I pulled up a stool at Kopi Desa and immediately a guy from Birmingham slid into the seat next to me and asked if I’d mind chatting to him. As he rambled on, I could see a couple, obviously British, trying to catch my eye to see if I needed help. I can’t remember how I made it over to them but I did and they said the guy had been hitting on lone women all day. It’s always a British guy, never a local. They introduced the barman as ‘the best-looking man in Goa’. I couldn’t disagree.

Over the next few nights I met more Brits there, plus Indians, Scandinavians and Coca-Cola the cow who popped in for a drink every evening. The bar is open to the street so you’re surrounded by everything, from the bell-ringing bread boy on his bike in the early evening, to the beach dogs scouring for scraps. I spent New Year’s Eve with friends I met in this bar, watching fireworks on the beach at H2O. I had the best New Year’s Day ever.

I’d started dating someone before Christmas and whilst I’d enjoyed the time we spent together I wasn’t truly sure I was ready to commit to them. At first I thought my trip to Goa was getting in the way of progress, but in truth it gave me time to reflect and think about what I really wanted. I watched the White Horse, a symbol of freedom without restraint in many cultures, completing her daily ritual with no one to stop her. I remembered one of my favourite Sex and the City quotes, cited at the top of this post, and knew it applied to me. I thought about returning to Agonda, a place I already knew I loved, with a partner and I felt sad. I knew I wanted to come back on my own, with no one reining me in or saddling me with their needs and wants.

I knew I didn’t want to be one of the many women with families I’d witnessed, anxious and hovering over their brood (and injured animals), unable to just relax by themselves and watch the ocean. I’d sat next to a woman on the plane out, who was separated by the aisle from her family and spent 10 hours slightly angled towards them, watching them, whilst they completely ignored her and vegged out with dad. I didn’t want to be a woman in an unhappy coupling, waiting until she’s in a group to make sly digs at her partner. I’ve done that and it sucks.

I did want to be the free woman on New Year’s Eve who whooped at fireworks with the happiest couple on earth, Lucy and Jason, who were on their honeymoon mega-trip. A couple who are happy to spend time with a single woman are rare indeed – and you know they are the strong ones who will last. And I did want to be the woman who shared a bottle of prosecco with the best-looking man in Goa when the fireworks were over.

If the New Year is about making choices and stepping forward with the right ones, then here I stand: unfettered, mane blowing in the breeze, stamping my hooves with joy.