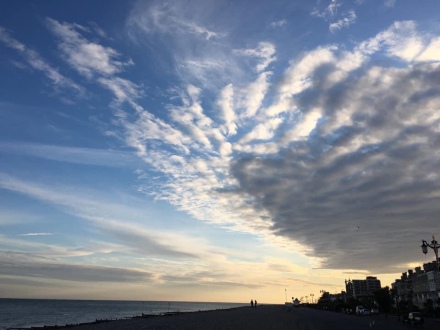 I’ve realised that I’ve got a thing about the west. Not ‘the west’ as in globally, but I appear to gravitate west in all things.

I live in West Worthing in West Sussex and I walk in a westerly direction every morning. To go east doesn’t feel quite right, although I walk back in an easterly direction. I walk east in the evenings in order to walk back west and enjoy the sunset.

I’ve noticed that on the way out in the mornings, going west, I feel creative, imaginative, hopeful and dreamlike. Coming back in an easterly direction I am facing the reality of the day. I start to rush knowing I need to get back to ‘my desk’ (aka the kitchen table) and my brain starts to fill with my ‘to-do’ list.

When I’m going west, I feel like I could just keep travelling, keep moving over the horizon, but when I’m travelling back in an easterly direction it feels like I’m on a return journey. I wonder what it is that drives me west so much. Is it something to do with me being left-handed, and therefore my brain veers left when faced with its internal north? Is it because I grew up on the north-west Wales coast? I’ve no idea, I just know it’s a thing that I do. It’s my internal compass. Even when I moved to London I went to university in the south west, later lived in the north west, and in between forayed into Buckinghamshire, to the west of London. When I moved to Brighton in the ’90s, I quickly moved west into Hove.

It simply feels ‘off’ to me in the east of anywhere. I can’t really put my finger on why. I can only stay for about an hour in East London before I want to go back west. Once, I was on a date watching a really bad comedian in an East End hipster bar and he starting making fun of me in the audience because I ‘looked posh’ (I was wearing a fake-fur jacket). Really, he didn’t like it because I wasn’t laughing. When I got up to leave, he said, “Are you going back west to the poshos?” “Yep,” I said in front of everyone. “Get me out of here.”

This week in West Sussex has seen some high winds buffeting the coast. They’re southwesterlies and they create, it seems, the biggest waves here. I’ve been watching the kite surfers out west – and out in force since lockdown rules allowed them out – and it’s a real delight to watch grown men (and some women) whoop with joy as the wind carries them high above the waves. I’ve seen videos of people jumping over the pier so it’s a thing here. God I wish I could join them. As I watch, I imagine myself skimming the waves, lit by the bright spring sunshine, grinning as the wind takes me. Having not long learned to swim, it’s probably not something I should leap into but I confess I’m tempted.

Every morning that I walk west, I dream of just carrying on going on the coastal path, all the way to Cornwall. I thing of Raynor Winn’s Salt Path and the epic journey she and her husband did around the south-west coastal path and wonder if I could just do that. Me and a tent. Maybe a small dog in tow. I dream of owning a small white cottage in a west Wales coastal village, where I can see the sea from my desk and walk in the wind every day. I dream of hearing curlews at dawn, just like Dylan Thomas did.

For the first time, some of these dreams seem attainable. Maybe not right now, but they’re within reach.

One thing I do know, I belong in the west.

Rage, rage against the dying of the light.
Delighted with my book review in this week’s @hellomag.
Good to be back...
“The only sea I saw was the seesaw sea with you riding on it.”
My hometown, Holywell. This is Panton Place, built in 1816 for local tradespeople. It’s the prettiest place in town. My taid (grandfather) lived here for a while after my nain (grandmother) died.
Views from my own local stretch of the @walescoastpath - Greenfield to Llannerch-y-mor. I came off it at that point because I was warned about flooding. I never came down here for the whole twenty-two years I lived in North Wales. It surprised me. The Wirral is visible across the Dee Estuary.
Loading Comments...
%d bloggers like this: