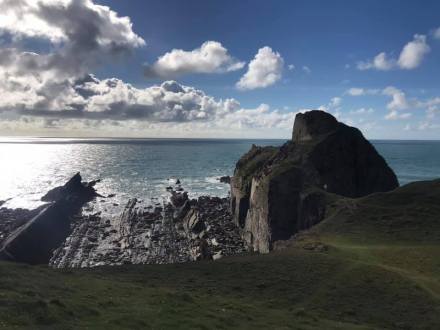 The plan: to walk a section of the South West Coast Path, starting at Clovelly and ending at Padstow.

The imagined route: an undulating, easy coastal path with the odd bump, reminiscent of the Seven Sisters cliffs, punctuated by cosy tea rooms.

The reality: a remote wilderness hike consisting of extreme climbs and descents with nowhere to fill a drinking bottle, let alone order a cream tea.

After spending most of the summer hiking the South Downs Way and returning to the Seven Sisters as part of our ‘training’, we thought this one would be a doddle. My hiking friend, Paula, and I have been across the world together on some pretty adventurous hikes but this one would be a proper holiday, we said. Not like Kyrgyzstan or Armenia, where we’d been wild camping and struggling up mountain passes at altitude. Let’s be kind to ourselves, we said. Let’s have a proper holiday in lovely Devon and Cornwall.

Trouble is, we thought the guidebook was exaggerating when it said the South West Coast Path, made famous recently in Raynor Winn’s The Salt Path, was ‘challenging’ and ‘relentless’. We thought that was just a warning for people trying to attempt it in flip-flops. Oh how wrong we were.

The first stretch, Clovelly to Hartland Quay was the ‘easy’ day at just over ten miles, but even that had its fair share of ups and downs. It took longer than we thought to reach our destination. However, there was at least a kiosk at one point serving ice cream. As we sat down to dinner at Hartland Quay Hotel (the only place to stay), we read about the following day’s fifteen miles to Bude. The hardest stretch of the entire path… Challenging/severe… Don’t be fooled by the easy start… People in the hotel gave us a look when we said what we were doing. One said we had ten deep valleys to encounter, another said five. Someone mentioned waterfalls. How challenging can it be? we said to each other. Surely not as bad as Kyrgyzstan, where I’d been in so much hip pain I’d had to get on a horse…

Worse. Worse than Kyrgyzstan. More than ten deep, deep valleys to climb into and out again. All the way down to sea level, over a little bridge spanning a waterfall and up the other side again. Relentlessly. No tea rooms. No scones. Just climbing. And then the next day, too: Bude to Boscastle.

No one talks about this side of Devon and Cornwall. No one says that it’s proper wilderness hiking with no facilities and no one around. It felt like being on the west coast of Ireland, Scotland – or even Iceland or the Faroes, Paula said (having been to both). And we agreed, this was harder hiking than Kyrgyzstan, which had been the hardest thing we’d both done together (Paula said only Greenland was worse).

We both belong in hiking groups that never venture here. It’s hard to get to and hard to herd groups of people here. We met people in ones and twos doing the same thing, most notably two women in their seventies who were wild-camping the whole thing and this was their last stretch. They didn’t even use tents – they were using tarpaulin to sleep under. “This is what you do in your seventies!” they shouted as we parted ways.

We met a young woman who had walked from Gloucester who was trying to find a suitable place to camp; we saw another who was lying against her pack, waiting for us to walk past so she could pitch her tent. It was next to a herd of goats. We yodelled and I think she heard us.

As we took on every uppy-downy (as they became known) of the trail, we mused on how, if we’d known what this part of the trail entailed, we wouldn’t have attempted it at all. We wouldn’t have seen the incredible rocky outcrops pushing out into the glittering sea, or heard the crash of the Speke’s Mill Mouth waterfall as it plunges into the sea. We wouldn’t have seen the purple-heathered slopes at Cleave on the way to Bude, my personal favourite moment of the trip, or experienced the pride and joy of looking back at the valley we’d just traversed. Every climb and every descent brought a new ‘wow’ moment and a new angle on the breathtaking scenery and there was barely anyone else there to witness them with us.

We knew when we were approaching a car park or a village because people would appear with dogs and it would feel like an intrusion. As we got closer to the more popular stretches of the path we mourned the loss of the wilder stretches and realised that with cream teas came crowds. At Tintagel we finally lost it. The whole place was shrouded in fog and drizzle, and people were queuing up to walk across a new bridge to the castle from which they could see nothing. Get us out of here! we thought and promptly took a taxi to Port Isaac, which was pouring with Doc Martin fans.

As the weather improved, the hiking got easier, but our hearts were still in that wilderness we’d left behind. We’d overcome a psychological barrier and could face a deep valley without dread, just acceptance. We knew if you started counting them it was the road to exhaustion; you just have to get on with them. I had practiced my yogic ‘santosha’ – conscious cheerfulness – to get me through the hard stretches. I smiled and sang to myself, knowing that smiling is proven to make you feel happier. I can confirm that it works. I sang, “One singular sensation” as I walked sideways down hillside steps with my hiking pole, Bob Fosse-style.

And joy of all joys – I’ve finally invested in hiking boots that are wide enough for my feet. I had no blisters. Nothing. After years of being crippled on day one of a hike. I am like a woman renewed – no hike is too far for me now.

We surprised ourselves on this ‘holiday’ (and agreed that it wasn’t a holiday). We climbed every mountain and forded every stream: without injury, without tears, without blisters. We each employed a different approach and it worked – Paula likes to get up a hill very quickly to get it done, I prefer to plod slowly and continuously and get there without breathing through my arse. Before now, I’ve tried to rush up hills and felt awful. It’s easier when you’re not in a group to take your time. “Steady as she goes” is my mantra. We’d meet at the top and congratulate each other on a job well done.

And can I sing the praises of a pasty as the perfect hiking lunch? A meal wrapped in a pastry case, still warm from the morning’s oven. Thank goodness we made sure we had packed lunches and pasties with us from every town we stayed in. There was nothing in between each stop apart from that first kiosk, the two cafes at Crackington Haven and Sandymouth Cafe outside Bude. They were like oases in the desert.

At first we were disappointed not to be staying in Padstow (aka Rick Steinville) but then we discovered the YHA at Treyarnon. What a find. A sea view, a glorious beach, food being served through a hatch. I’d definitely go back there.

A woman in her seventies (or eighties?) approached us as we waited for the bus into Newquay, hiking all completed.

“In my day when we were walking, we didn’t allow getting buses.”

Lady: “Oh!” *looks Paula up and down incredulously. Looks at husband in disbelief* “Oh wow – you’ve done all that!”

View from the church doorway. It always pays to look back...
Raindrops
Bank Holiday Blues
An amazing day in the Fells, doing the Newlands Round: Cat Bells, Maiden Moor, High Spy, Dale Head, Hindscarth.
Blencathra today. I’ve wanted to climb it for a long time. I can see why people love it so much...
Loading Comments...
Comment
×