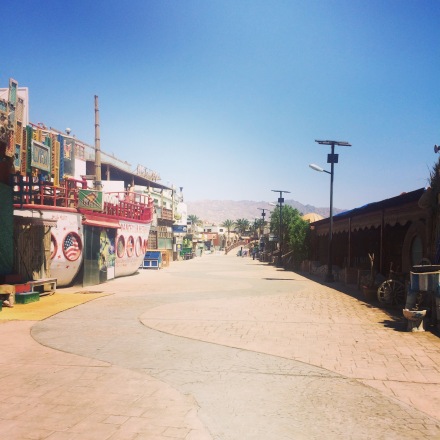 I’m writing this in my final few hours in Dahab, once more struggling with the idea of leaving this amazing town. The wind is softening the heat of the sun today, and I’m just sitting by the pool, hearing my last call-to-prayer (I think) and mentally preparing for the trip back to Sharm El Sheikh airport.

Whenever I say I’m coming here people say to me, “ooh isn’t it dangerous?” No. No, it really isn’t. I’m pretty sure it’s more dangerous living in London, where only recently someone got shot on a road near to mine, and various members of ISIS in Syria have been recruited from a local school.

To get to Dahab you have to get a taxi from Sharm airport and drive for about an hour through the mountains on quiet roads. There are two police checkpoints on the way, and depending if your driver is friends with them or not (or well known) then you simply pass through after the usual Arabic pleasantries. Given that the queue for passport control is about a tenth as busy as at a London airport, I’m fine with this. At one point, you had to join a convoy of cars to drive through the checkpoints, now this is not the case.

Southern Sinai is perhaps the most security conscious of all the Egyptian governorates because it houses the all-important tourist industry. Hence the police presence. ISIS are active in one tiny corner of this 1 million-square-km country, in the northernmost part of Sinai, bordering Israel. Whenever I mention this to a local friend, they express surprise that it’s even a consideration to tourists given that it is so far away.

I fly with Easyjet to get here and at 4hrs 45mins outbound, it feels quicker and quicker every time I do it. Almost always, I’m the only passenger going to Dahab – thankfully – but I always think, “Oh you have no idea what you’re missing out on…”

I’ve written a lot already about how scared I was of everything here, and how those fears have eroded over time. I now know that I am incredibly safe here, from walking alone in the dark, to leaving valuables lying around in a cafe or by the beach. People respect my person and my belongings and I know that they would drop everything to help if I found myself in a ‘situation’.

It’s all too easy to translate the shopfront ‘hassle’ as something more insidious, as I did previously when I had a panic attack inside one, but it’s just the way things work here. However, even the locals are learning that the less they hassle, the more likely it is they’ll get tourists to come in to their businesses.

Now I’ve just got to adjust to the culture of nothing quite being what you think it’s going to be. This applies to the timing of things, the cost of things, and what you expect things (like day trips) to be. At first you think you’re being taken for a ride, but you soon realise that this is just the way things are here. Nothing is quite what it seems at first, but that doesn’t necessarily mean that’s a bad thing. In fact, it’s often an improvement, if you let yourself go with it. You can save yourself a whole lot of bother if you just adopt the local, ‘what can you do?’ shrug and get on with it.

So once again I’m leaving here knowing full well that I’ll be back. The only fear is that something will prevent me, but I somehow know I’ll find a way to return to this magical place.

I’m stopping now because a cat wants to climb on my keyboard… See you on the other side.

I’m writing this on the other side, filled with horror and sadness at the news about the Russian Metrojet plane crash. Not only for the deaths of innocent people and the grief of their families, but also for my friends in Dahab who rely on tourism for their livelihoods. As they say, I hope all will be ok, inshallah.

The arrival of the chapatis, and a high five
Endless doorways
Block printing
🕉 Step Well - the most extraordinary hidden temple area in Jaipur